If you have a mother like mine, chances are, as a child, you’ve experienced a scenario like this. You’re four or five years old and she tries to introduce you to new food. You’re not acquired to the taste of anything that isn’t processed or smothered in cheese, so you refuse to take another bite of the seafood, meat, or vegetable she’s placed in front of you. She tells you that you should be grateful for the food because there are kids starving in poorer countries, and being grateful means not putting any edible food in the trash.

Most of us had mothers who told us not to waste food. And yet, while millions die of starvation and millions more struggle to feed themselves, the world is actually wasting a third of all produced food. That means, upon production, food that is edible and perfectly good enough to eat is still thrown in the trash.

This isn’t from households alone. From the farm to your table, farmers, food corporations, and retailers throw away food deemed “too ugly” to sell, no matter if it’s still in good condition. Supermarkets want its consumers to feel like they’re consuming fresh goods, so anything that’s a few months away from expiration and are unlikely to be bought are immediately thrown away and replaced with products with longer shelf-life.

This is so much food waste that it’s almost criminal. So, why don’t we make it so? Imagine a world where food is treated like the non-renewable product it is and people take food shortages so seriously that it becomes criminal to waste food.

The first to be jailed as repeat offenders would be the people behind the food businesses, distribution centers, and grocery stores. Out of all the food waste the United States alone produces – around 43 billion pounds a year – Americans create around 40 percent of their food. But the biggest offenders would have to go to the corporations who supposedly maintain a clean image through food waste.

Imagine what a typical apple looks like. Even without looking at one, you can image the average shape of one. That’s because if you go to a grocery store, you’ll find that all the apples look practically the identical. And that’s not by accident.

Grocery stores, manufacturers, and other parties involved in getting produce off the tree or on the ground and into your supermarket take away food that looks imperfect or “ugly” even if it is fine to eat. One would think bad apples get sent back to become compost or fertilizer for more produce or donated to charity, but that’s not how businesses work, so businesses are forced to dispose of the food in such a way it becomes inedible. 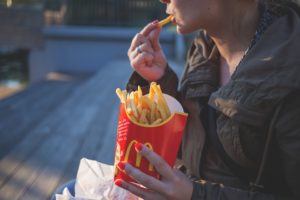 To see why businesses have developed a mindset for this type of disposal, look at this example. In an average McDonald’s, they don’t cook your fries made to order. Instead, they cook a large batch of fries to ensure that you get hot up to warm fries. But, if business is slow, eventually, the fries will get cold and they can’t sell the remaining fries they have even if it’s edible; they’ll have to make a new batch.

If you were a customer who paid $1.89 for large fries, McDonald’s – and other fast food restaurants – think that it’s unfair for you, a paying customer, to see McDonald’s giving away cold fries for free to charity. Second, it’s supposedly bad for business, handing out edible (but unsellable) products, so rather than to give the food to the customers, staff, or donate to nearby people who might want a bite, McDonald’s can opt to throw the fries away.

If food waste became illegal, these practices would be illegal, too. As a result, most of the food industry will have to adapt and change the way they handle their products. First, food would only get tossed if it’s harmful for consumption. Second, businesses will better calculate the amount of food they need to prepare to avoid food getting cold. Third, if businesses were forced to sell food deemed too ugly, they could start selling them at a discounted price. Not only would there be a decrease in food shortage, people have the option to buy cheaper but perfectly edible food while, instead of throwing away produce and creating a loss, businesses can still profit. It’s a win-win-win for everyone involved and the environment.

Accomplice to the Crime: People and Supermarkets That Take the Sell-By Date Seriously 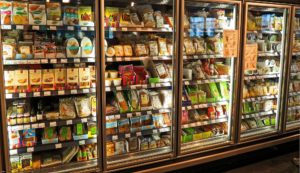 If food waste were illegal, people and supermarkets that threw away perfectly good food because of a sell-by date. Most people think the sell-by date and use-by date are the same, but really, it’s not. The sell-by date is meant for businesses to know when they should sell the product; after that date, the food is still safe to eat. Some businesses reclaim food from stores that are past the sell-by date, mostly bread and pastry-based companies.

That’s why it’s such a waste that some businesses, even if the sell-by date is months away, throw away food thinking that it’s gone bad or people will not want to buy it. And while people have the same misconception, it’s a misconception that’s contributing to a ton of food waste each day.

In fact, there are even some food products that, even beyond the consume-by date, is still safe to eat. In a lot of cases, the consume by date is not the date when food goes bad, but rather, the date when the quality of the food begins to change. For example, after a best-before date, chips may start to get less crunchy than the crunch the original manufacturer intended, but it is still good and still safe to eat. The only time you should throw out food is if it grows mold, has a funny smell, or is visibly not safe to eat anymore. 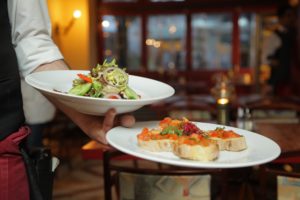 People may claim that it is near-difficult to decrease food waste or get it to become law, but it’s already been put into practice in Paris since 2015, so why can’t the same apply to the United States and the rest of the world that’s contributing so much to the food waste problem?

France’s move towards decreased food waste shows that if the world took food waste seriously and made it illegal to throw good food, it is still possible for businesses and private citizens to do so. They would become more conscious of the food they buy or intake, changing the supply and demand and causing food manufacturers to stop over-producing to meet the over-consumption.

It Starts with One Person

Perhaps the biggest reason why food waste is not a crime is because there’s no accountability. Your mother or whoever made your food might frown when you don’t finish your food, but when it comes to larger corporations, who holds a business accountable for the food they waste?

The FDA regulates drugs to make sure they’re effective and food products to make sure they’re edible. But the FDA, nor any other organization, does not regulate businesses in terms of food waste created simply because of appearances. It becomes the business’ choice to dispose food they consider too ugly for consumption, and if that means throwing away ugly food for the sake of maintaining a certain image, no organization exists to tell them to stop.